Meet Puma Cat, the paranormal psychic detective!  He is a super sleuth that can also shoot psychic blasts with his mind's eye!  Can you help him solve the case and beat the boss?

All sprite art was created from scratch in Photoshop CC.  Game engine is Unity.

Criteria for this game jam:

Visual Novel ->  The levels are pages of a book.  After combat, read the page and move on to the next chapter.

Animals -> The main characters is a cat named, Puma Cat.

Mysterious -> The story has a mystery that revolves around ghost cats.

Extra diegetic music -> There is a ghost cat band on every page, playing music that matches the scene.

SFX are original, and from  freesound.org

Updated version 1.1: Fixed a bug were enemy waves were still spawning during the boss battle (and delaying next scene corner page spawn).

Updated version 1.2: Implemented improvements learned in Puma Cat 2 . Updated with 'wave spawner start' shoot target at the end of the page.  This way players can read the page before enemies appear.  Also, Camera is more zoomed out so the player can read the whole line by standing in the middle (instead of side stepping and reading).  Finally, took some of the updated code from Puma Cat 2, which improves various things like controls and enemy AI.

Very cute. I enjoyed the story and its kid friendly thats always a plus! 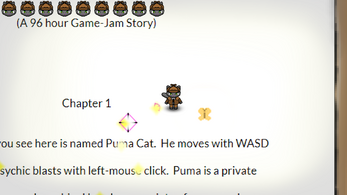 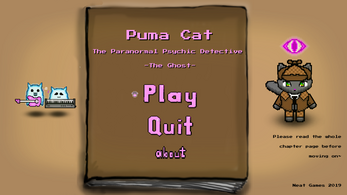